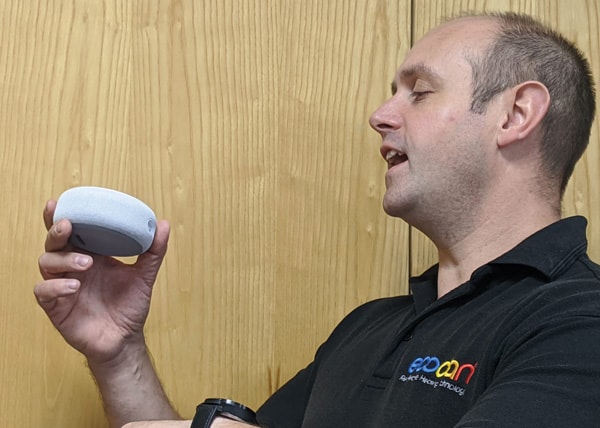 If you’ve not yet heard of the Internet of things or IoT, just where have you been for the past few years?

Whether or not you understand the impact that the IoT is having on just about every aspect of society, at home and in business, you must have noticed the increase in devices that you can talk to, such as Alexa, Google Home, Apple HomePod, Echo Show, etc.

Yes, it is fair to say that we are entering the early days of AI control and automation for many, many things, including cars, so I wanted to talk about how this is now available on your air conditioning and heating systems.

I recently decided to pair my home air conditioning with Alexa (of course I have air conditioning at home because 1) I’m an AC engineer, 2) I’m a geek and 3) it really is so cost effective at both heating and cooling).

The device we use at Mitsubishi Electric is called Melcloud and it will sync with Alexa. There are pairings with other systems coming soon, but I’ve got Alexa at home so the first task for me was to pair my Echo Dot Alexa to my Wi-Fi.

Voice commands
Then I opened up the Alexa app, added in a new skill which I simply called “Melcloud”, told it which things were in which rooms around the house and there we are. All done. Couldn’t have been simpler. And this is where the fun starts for someone like me!
Firstly, I decided to name the wall mounted unit downstairs as “Living Room” and the other one as “upstairs”.  I can then call out simple things such as: “Alexa, what is the temperature in the living room?” Or instructions such as: “Alexa, make the living room cooler”.

Now things were all going great.

And then the battle begins between my wife, my kids and me as to who can control Alexa the fastest! We spent a good half an hour shouting out competing instructions to poor Alexa but she did seem to cope really well. I, however, ended up very, very confused and a little bit too hot! I realised that my daughter likes it exceedingly warm in the living room.

Once the novelty had worn off with us all though, it really started to make sense. Now, I don’t need the infra-red controller, I don’t even need to go and find my phone. I just say “Alexa turn on the living room”.

We’re planning short “How to” video guides to help customers through the initial set-up process for both our air conditioning and Ecodan products and this also spells out the full list of voice commands that will be supported.

These include turning devices on and off, checking and setting temperatures, checking what mode an individual unit is in, and setting a device to cool, heat or go into automatic mode.

So, the ‘techy’ side of me has really been enjoying itself with all this technology and I do still like playing with the commands.

My ego though did take a slight dent the other day when I said: “Alexa, make me cool!”… and she came back at me with: “I’m sorry, but that is beyond my capabilities!”.

Ben Bartle-Ross is a technical trainer on air conditioning and heat pumps with Mitsubishi Electric.